Formula One is the best sport in the world.

In F1, like all motorsport, drivers have died doing what they love.  And unfortunately more will die in the future.  That is part of this sport; part of life.

Recently I read an excellent book - "Senna vs. Schumacher". 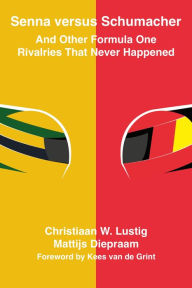 The authors wrote a fictional account of how the rivalry between these drivers might have played out if Senna had survived Imola in 1994.  It is a great read, insightful and highly recommended book.

There are 5 stories they tell:


It's an excellent concept and a huge amount of research, dedication and love went into writing it.  It's very well written and I would recommend any F1 fan to pick-up a copy.

For each story I tried to predict the outcomes myself before reading and below are my thoughts on that.  There are no spoilers here, just my opinion prior to reading the book.

Finally there is Richard Seaman, I didn't know much about the pre-1950 racing, so this book allowed me to learn so much and immerse myself in that era.

"Senna vs. Schumacher" made me think about other F1 drivers who passed away and what their future could have been.

Peter Collins - in 1956 while still in contention for the title, Peter famously handed his Lancia-Ferrari D50 over to eventual champion Fangio.  There is little doubt that Peter had the speed to be champion himself one day.  His selfless act will never be repeated in Grand Prix racing.

Wolfgang von Trips - driving for Ferrari in 1961, the year of his death, "Taffy" had a very competitive car - the iconic Ferrari 156 "Sharknose".  Would he have had the car to win it after 1961?  Probably not as the next 2 years were dominated by Graham Hill and Jim Clark.  1964 is another matter though as Ferrari did it again with John Surtees.  I think von Trips would have been an influential part of the sport given his skills and outgoing personality.  Champion too?  Perhaps.

Jochen Rindt - there is plenty of debate about whether Jochen would have continued to race in 1971 after becoming World Champion in 1970.  My guess is that he would!  Given the dominance of Jackie Stewart and Tyrrell in 1971, his next chance would have been in 1972 which of course Lotus won with Emerson Fittipaldi.  Rindt might have been a double World Champion.  What is clear though is that Jochen was an astute businessman and very close to Bernie Ecclestone.  Hence I am sure that he would have been heavily involved at in F1 for many, many years to come.

Francois Cevert - the popular and charismatic Frenchman died while under the wing of Jackie Stewart in 1973.  Jackie himself has no doubt that Francois had everything needed to be World Champion ... and that's good enough for me.

Roger Williamson, Tony Brise and Tom Pryce - this trio of British drivers were all considered massive talents and potential future World Champions.  They lost their lives in 1973, 1975 and 1977.  A book "The Lost Generation" was written about them by David Tremayne and surely they were destined for much success in Formula One.

Ronnie Peterson - Ronnie was always considered a sublime talent behind the wheel of an F1 car.  Therefore I am certain greatness was in-store had he not perished at Monza in 1978.

Jules Bianchi - Jules was only in his second F1 season when he died following an accident at Suzuka.  Already a Ferrari protégé and test driver, he was widely regarded as having the right stuff and was destined for race wins and more.


There are many more drivers of course who had potential for greatness not listed above: Eugenio Castellotti, Luigi Musso, Stuart Lewis-Evans, Alan Stacey, Chris Bristow, Ricardo Rodríguez, Lorenzo Bandini and Piers Courage to name a few.

Not only did all of these drivers tragically lose their lives but the world was denied their talents and contributions both within and outside the motorsport world.

Circling back to the book "Senna vs Schumacher", I believe there should be more F1 fiction and this book is a great example of how good it can be.  These stories really make you think about what might have been.  An excellent book!

Thanks for reading, please leave your comments.